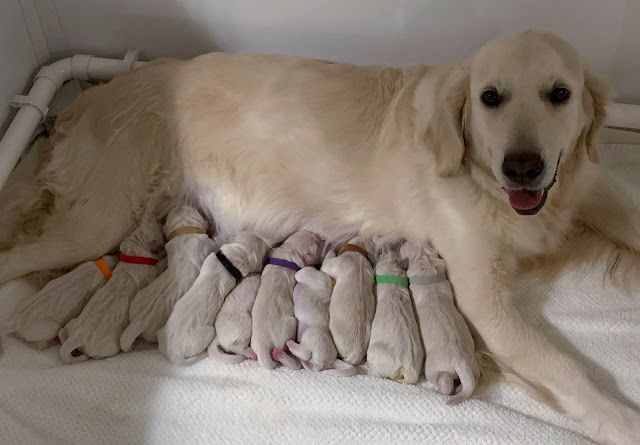 Puppies are typically born in the middle of the night, but every now and again we catch a bit of a break. In fact, Pepper surprised us with a quick “deposit” of Miss Twilight (Purple) at 4:15 pm before we even had a chance to set up for the big event. In as much as we follow the science by taking temperatures, monitoring behaviour and stages of labour, we had to do a quick scramble. Her brother, Mr. Galaxy (grey) followed at 5:22 and so it went every thirty minutes of so for Miss Mars (Red), Mr. Martian (Green), Miss Milky Way (Beige), Miss Sunglow (Orange), Miss Comet (Yellow) and Mr. Supernova (Blue) at 8:15 pm. Pepper was dropping them out like a vending machine* so we were optimistic. And then we waited and waited and waited. It wasn’t until we carried out a procedure to “shuffle the deck” (dislodge a stuck puppy) that we were graced with the presence of “Number Nine” - Mr. Starry Night (Black) at 10:08 pm. Fortunately his sister Miss Moondust (Brown) capped off the event at 11:00 pm.

*It’s not unusual to have to wait anywhere from twenty minutes for up to three hours between births.

It never ceases to amaze us how the little ones know exactly what to do from the first minute onward and how they instinctively suckle and how moms know they need to do their part in stimulating the new arrivals to breathe and to eliminate by licking them. Apart from nourishment, a mom’s milk contains antibodies vital to the puppies’ survival for the first several weeks of their lives. We weigh the puppies twice daily for the first week to ensure that everyone is getting equal access to the milk bar, Pepper and her bunch have done an excellent job in working out their own rotation considering there are ten puppies to share eight stations. They’ve needed very little intervention on our part. At the one-week mark, everyone’s weight is on the way to doubling which is clearly a testament to Pepper’s abilities as a mom.

Puppies are born without sight or hearing and their eyes don’t open until sometime during the second week, so for now their senses of smell and touch are what guide them to their target. They use their tiny forelimbs, coupled with great tenacity, to propel themselves around as they seek out their sustenance and warmth. Since their body temperatures will not have been regulated until after week three, the little gang relies on their mother and each other for warmth. When mom is on her break, we use a heat lamp to keep everyone warm and cozy. We’ve found that these kids love to nestle into their mom or use her paws for a pillow as they dream the dreams that puppies do.

That’s it for now but be sure to join us next week for another beguiling installment of “Puppy Tales.”

Popular posts from this blog

April 19, 2021
Chanel - 49 Days (pre-parturition) Chanel does not appear to be slowing down, still running with the pack and getting into trouble with the rest of them. She did have a little extra winter weight, but it seems her pups have “grown” into her and she is looking good. She enjoys monitoring the perimeter of the yard for possible intruders and occasionally sounds the alarm for wild turkeys. She has a ferocious appetite, so we have broken her meals into three daily to hopefully satisfy her. She continues to eat a very well-balanced diet of antibiotic-free proteins which are rotated daily. She’s very fond of lamb and duck lately but is also having chicken, turkey, beef and pork. Each meal has a mixture of fruits and veggies to balance her diet. Chanel’s waistline now measures 33 inches or 83.8 cm.  Fetus at approximately day 39 By day 30, digestive and respiratory glands, muscles, bones, circulatory, genital and urinary systems, the skin and hair, the nervous system and all the puppy's se
Post a Comment
Read more

December 14, 2021
Sleeping beauties! “I’ve Fallen and I Can’t Get Up” At first glance, it may appear that the puppies spend all their time sleeping, but they also do their share of exercising. As they lay there asleep, they are constantly twitching. These involuntary actions, referred to as “activated sleep,” help strengthen their leg muscles and begin to build muscle mass. We’ve also added a rolled-up towel which serves two purposes. It acts as a barrier to place the pups behind when mom is entering or exiting the whelping box. It also creates an obstacle course that the puppies must climb over to help them get their muscles into shape. All was well until one day; we heard a persistent cry for help emanating from the whelping box. Upon further investigation, we discovered Mr. Supernova stuck on his belly atop the roll with all his legs flailing in mid-air. We’re sure his legs will be long enough in another couple of days. It’s always exciting for us when the puppies’ eyes open at around the 10-day mark
Post a Comment
Read more

Regalgoldens
Our goal is to breed and raise exceptional quality British Style Golden Retrievers. Our bloodlines are from only the most respected kennels worldwide. We are members of the Canadian Kennel Club, UK Kennel Club and GRCC and strictly adhere to their code of ethics. Our breeding dogs have passed all health clearances for eyes, heart, hips & elbows.