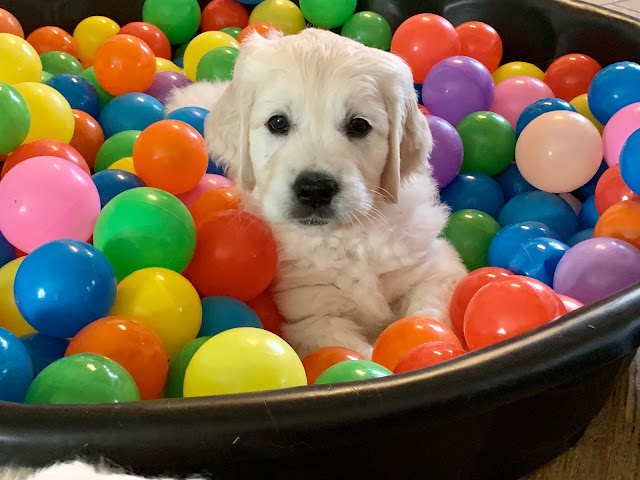 What a week! The action began one afternoon between shifts, when our caregiver leaves for the day and we arrive to take over. In the ten minutes that the pups were unattended, it seems that piece of trim around the entrance to the whelping box that holds all the slats in place got compromised. We arrived to find every single puppy had exited their dwelling. They were all around the sunken living room and even a step up in the kitchen area exploring this new territory – even Olivia’s water bowl in the kitchen was being used as a swimming pool. A quick repair allowed order to be restored and everyone to be returned to their quarters.

As the weather got to be somewhat messy throughout the week, we did legitimize kitchen playtime with the gang by setting out some mats, their play station and their favourite: a tub of balls! The action ramped up in no time as some were bashing the play station with their paws, batting balls around the kitchen and “swimming” in their ball pool, not to mention some zoomies around the island.

These pups are so demanding and Olivia is so obliging that the poor girl experienced a severe bout of milk fever or eclampsia. This occurs when mom’s calcium supply is so depleted from nursing that her temperature spikes to dangerous levels along with panting, disorientation and tremors.  We succeeded in bringing her temperature back down with cold towels and icepacks but the most results were obtained with administering high doses of calcium. Olivia improved throughout the day and was her usual cheerful self within 24 hours. This condition meant she was no longer able to nurse her pups, which wasn’t an issue since they were largely weaned anyway. In order to prevent her from doing so, we had her wear a surgical gown when she was around the pups. In not nursing, Olivia had an abundance of milk. When she cuddled with us, there was so much milk leaking out of her that we became completely drenched requiring a change of clothes on our part.

We finally managed to get everyone outside to experience our winter wonderland. For the first five minutes, they huddled around in a group near the door, unsure of what to do next. One by one, overcome by curiousity, they gathered up their courage and dispersed around the yard near the house. On subsequent outings, their comfort level grew even more and they ventured further, played chase with each other or their mom, climbed rocks and found some little twigs to munch on.

As our time with the puppies draws to a close, we cherish every moment we’ve spent with them. We’ll miss those twelve little faces peering up at us, constantly whimpering to communicate the need for kisses and cuddles yet we find comfort in knowing how much happiness they will bring to their new families.

So long, little ones. We wish you all the best in your journey, but most of all, we wish you love.

P.S.  We’ll be looking for your picture postings on our private Facebook group: Regalgoldens Family Tree or on Instagram (#regalgoldensfamilytree).

That concludes this edition of “Puppy Tales”.  See you next litter!

Popular posts from this blog

March 02, 2022
Who is the cutest? 😘❤️💋 “A Good Education”   Day by day, this group is becoming more active and playful. They’re spending much more time awake and when we’re in proximity, we can hear them bouncing off the walls of the whelping box as they engage in play with their siblings. This action continues well into the evening in between numerous rest periods. The play station is extremely popular and it allows the pups to hone various skills. When we walk up, they freeze and twelve little heads pop up in anticipation of a little petting or a cuddle. Of course, it’s not all just fun and games. A good education is necessary so the pups spend some of their time in seminars with (the mechanical) Mr. Owl who is teaching them English. The gang is also doing some science experiments on their own. For instance, is it possible to stuff a large plush ball into the mouth of the water bowl? The answer is yes!   You’d think that with all the fun being had in the whelping box, that the pups would be conte
Post a Comment
Read more

February 23, 2022
“The Porta Potty” The space within the whelping box has been redefined. One end now features sleeping quarters and the other end has a tray filled with paper shredding that serves as their lavatory. This is the first step toward house training until we’re able to introduce them to the great outdoors. In addition, the pups now have gym memberships with an activity centre and numerous plush toys at their disposal. And it’s open 24/7.  Dogs are pack animals and their emotional well-being relies on the presence of their pack-mates, whether other dogs or humans. It underscores the need for love that we all experience. The dynamic in the whelping box is evolving. This is the beginning of the most influential socialization period for the puppies. They’re learning to communicate with each other and with us by wagging their tails. With the increased control over their facial muscles, they are making expressions and are beginning to reveal their personalities and communicate their opinions. The
Post a Comment
Read more

Regalgoldens
Our goal is to breed and raise exceptional quality British Style Golden Retrievers. Our bloodlines are from only the most respected kennels worldwide. We are members of the Canadian Kennel Club, UK Kennel Club and GRCC and strictly adhere to their code of ethics. Our breeding dogs have passed all health clearances for eyes, heart, hips & elbows.